To assist you in sharing The Allies’ Message and Briefings with others, we are including this 12-point summary of the four sets of Briefings. This summary represents only a general overview and does not include many of the important details which make complete comprehension of the Allies Briefings possible.

“If humanity were well versed in Greater Community affairs, you would resist any visitation to your world unless a mutual agreement had been established previously. You would know enough not to allow your world to be so vulnerable.”

The Allies of Humanity, Book One: The Third Briefing 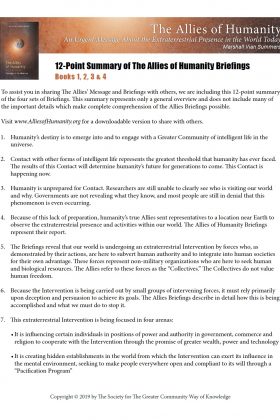