The Allies of Humanity Book Three:
A Message to Earth 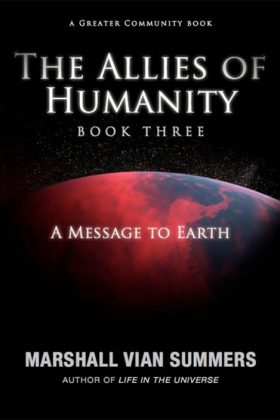 All of the Allies of Humanity Briefings are available free online. Begin the journey with Allies Book Three.

The Allies of Humanity Book Three presents the third set of “Briefings” from a mysterious off-planet source whose stated purpose is to orient the human family to the realities of life in our local universe and to alert us to a dangerous Intervention now occurring here on Earth.

The Allies of Humanity Briefings are a genuine communication from a group claiming to represent the “free races” in our local region of space. The Allies distinguish themselves from those races who are intervening in the world today. They warn us against the presence of this Intervention, insisting that no foreign race should be visiting our world, either now or in the future, until humanity has gained the strength, unity and maturity necessary to engage successfully with a Greater Community of intelligent life in the universe.

Whether humanity can ever attain this is uncertain, yet the Allies tell us that intervention in our world has already begun by several non-military races seeking to establish their influence and dominance in our world through deceptive and persuasive means.
The Briefings reveal that we are in the unfortunate position of being the race who is being discovered. History has taught us the danger and the tragedy that native peoples faced when they encountered outside forces for the first time. Now we are all the natives of a new world, and the threat of Intervention is upon us. As a result, the Allies are calling for us to build enough human unity amongst the tribes, nations and religions of Earth so that we may protect our freedom in a non-human universe.

With the Allies Briefings, for the first time, we are being given a window into the reality of life beyond our world, a view that we would never have otherwise. This creates a greater context for understanding why the Intervention is occurring, who is generating it and what humanity will need to know to preserve and build human freedom and sovereignty so that we can fulfill our destiny as a free race in the universe.

Get a copy of the book:


Second Briefing: The Requirements for Freedom in the Universe

Third Briefing: The Tools of the Intervention

Fifth Briefing: Many Voices in the Universe


The Society for The New Message is now providing all four volumes of The Allies of Humanity online at no cost. We do this so that this message can reach as many people as possible, both at the grass roots and in positions of political, economic and religious power.